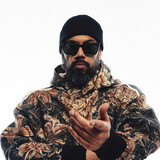 German rapper and producer Samy Deluxe earned media comparison to American superstar Jay-Z for his eloquent and imaginative rhymes. Born Samuel Sorge in Hamburg on December 19, 1977, he discovered hip hop as a teenager, finding it the perfect outlet for his angst and frustration. After a stint with the No Nonsens collective, in 1997 Deluxe (aka Sam Semlia, Wickeda MC, and the Big Baus of the Nauf) began recording for Jan Eißfeldt's Eimsbush label, issuing a series of mixtapes as well as several recordings as a member of the trio Dynamite Deluxe. His breakthrough effort was 2000's "Füchse," a collaboration with the group Absolute Beginner, followed a year later by the release of his first full-length LP, a self-titled release credited to Samy Deluxe. In 2003 he resurfaced alongside rapper Afrob as ASD, releasing the album Wer Hätte das Gedacht? The solo Verdammtnochma! appeared a year later, in conjunction with Deluxe's guest appearance on the Christina Milian hit "Dip It Low." After forming his own Deluxe Records label in 2005, the rapper followed a clutch of singles and mixtapes with the full-length Splash Exclusive. ~ Jason Ankeny, Rovi