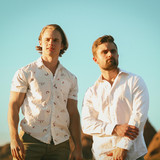 Ericksii consists of brothers Blake and Chad Erickson, who hail from the hot and arid Phoenix, Arizona. Since their arrival on the music scene in early 2019, Ericksii has performed alongside dance music legends such as Markus Schulz, Sean & Xander, Oliver Smith, Nox Vahn and Marsh.

Their productions and dance music interests range from melodic vocal trance, tech trance, to deep house. Common threads throughout their music are powerful chord progressions, dynamic arrangements, and compelling vocals from unique vocalists all over the world. Blake and Chad Erickson grew up listening to their parents' music collection from an early age. However, it wasn't until 2016 that they started taking music production seriously. Their debut single, We’ll Be Alright , was released in early 2019, which was followed by a smooth and melodic deep house remix of Christian Sparacio's Ravine - Ericksii Remix. Their most recent release in 2021 is Control, a clubby progressive tune. These brothers draw their inspiration from artists like Above & Beyond, Andrew Bayer, ARTY, RÜFÜS DU SOL, Fatum, Nine Inch Nails, and Jimi Hendrix. Making music and performing live together as brothers is a dream come true for Blake and Chad. They are grateful for the fact that they get to work together in a meaningful and creative way everyday. As a result, their music is a reflection of the humanity that intertwines through us all.