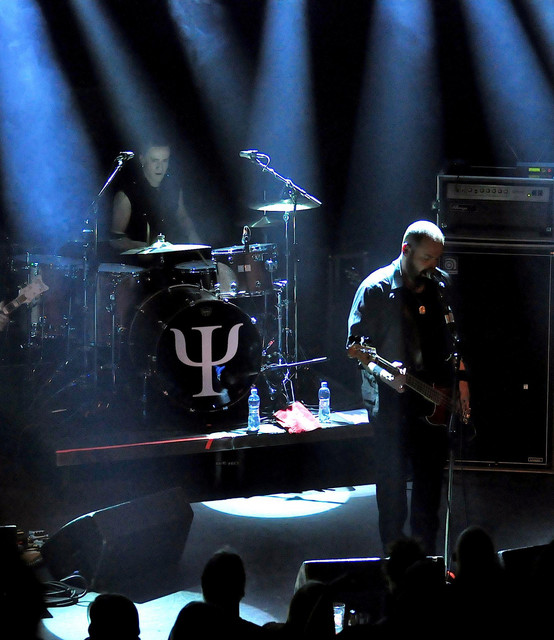 CMX certainly belongs to the major rock stars in the 1990s in Finland. That's not just because of Yrjänä's way of writing excellent rock songs, but also because CMX has renewed their sound throughout their long history. In 1985, CMX played simple and monotone hardcore, but their 2000 album contained complex and diversive rock music, often regarded as progressive rock. Music is also just a one half of CMX, since Yrjänä's poetic approach to lyrics has acted a great part on their records, from their hardcore years up to date. And not to forget CMX's powerful live performances, where their songs sound even heavier than on the records. In fact, CMX's performances at Finnish rock festivals have promoted their career better than anything else.   CMX was founded in 1985 when A.W. Yrjänä (vocals, bass), Pekka Kanniainen (drums), and Kimmo Suomalainen (guitar) put up a hardcore band after many unsuccessful band projects. They recorded a couple of demo cassettes, which gained a lot of fame among Finnish punk culture. After a while, they released an EP through some small punk label. This EP, Johannes Kastaja, was raved by music journalists and got CMX a proper record contract on the appreciated Bad Vugum. Right after this, in 1989, they released an EP called Raivo, which was an even bigger success than Johannes Kastaja and promised a lot for a following album the next year. After that album, Kolmikärki, guitarist Suomalainen retired. Before his retirement, Pasi Isometsä was hired to play second guitar and before CMX's next EP, Tanssitauti, Janne Halmkrona was signed on for lead guitar.   Changes in the lineup brought changes in the music as well. 1991's album Veljeskunta moved more toward hard rock, and punkish elements started to disappear. Still, CMX had more fans than ever. The single Musiikin Ystävälliset Kasvot, however, sealed the end of CMX's Bad Vugum era. Bad Vugum considered CMX's music too poppy and therefore it didn't follow Bad Vugum's concept. This wasn't the end for CMX though, because EMI was immediately interested in CMX's new style. Aurinko in 1992 showed that just a little enhancement in CMX's sound provided their music with a full energy. Aurinko became hugely successful and the following concerts showed that CMX were no longer just a poorly known underground band.   If an album is successful, the following work must meet the same expectations. That's why CMX put a lot of effort in preparing for 1994's Aura. Aura is literally pop music: distorted guitars are forgotten on many songs and instead, CMX used acoustic guitars, strings, and anything that'd make the complete sound brighter and sharper. Aura contains perfect prime-time radio songs, such as "Ruoste" and "Kultanaamio," which are still the most-played CMX songs. There might be no need to tell that Aura expanded CMX's audience even more, yet their old fans disappeared at this point.   In 1995, CMX had huge problems while recording Rautakantele. Luckily, these problems were solved, however it is told that they almost caused CMX to break up. CMX decided to continue, which was a fine decision considering that Rautakantele was a success. Distorted guitars were used again and the following concerts boosted CMX's career even more. But the next year, they decided to break limits again: instead of traditional recording methods, they entered a Pro Tools studio (meaning that the whole recording is digital; not usual among rock bands), and they used drum loops on various songs. This experiment was a success in an artistic and commercial sense, but for drummer Kanniainen, it was too much. He decided to retire since CMX had gone way too professional.   Before Kannianen left in 1997, CMX released a triple-CD collection called Cloaca Maxima. The next year, they went to Lapland with producer Billy Gould (better-known as the bassist for Faith No More) and their new drummer Tuomas Peippo. Their intention was to record an album in a wooden cottage in the middle of nowhere. This album, Vainajala, was an instant success since the sound was somehow raw and concentrated on distorted guitars. So again, the following gigs showed the popularity of CMX among the Finnish music scene. But the unfortunate death of CMX's temporary mixer after their gig in Greece stopped everything. CMX decided to stop all touring after their last festival gig.   So CMX concentrated completely on studio albums. In 2000, they announced they were recording a double album and went to the studio for half a year with their old producers Illusion Rake and Gabi Hakanen. The result was a huge album containing music influenced by old progressive rock monsters. This album, Dinosaurus Stereophonicus, was appreciated despite its length, and its singles became instant hits. Some time after its release, CMX decided to call back their promise about not touring and played a few festival shows.   In 2001, CMX took a short break from recording. At this time singer, A.W. Yrjänä started working on a video collection, mostly based on CMX's music videos. This video was released at the end of 2001, along with the new single Puuvertaus. After that, at the beginning of 2002, CMX went into the studio again to record a new album with their old producer Gabi Hakanen. ~ Antti J. Ravelin, Rovi