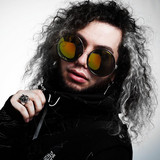 San Francisco-based artist/producer Grimecraft brings a candy coated symphony of colorful sounds and beats cut to the tune of nerd nostalgia. Drawing inspiration from his roots in rock music he has crafted a truly unique electronic sound that pulls at the heart strings of video game lovers and music fans regardless of genre. A world renown DJ of video game music, Grimecraft is considered to be a pioneer of the virtual music space. He began live streaming virtual concerts on emerging platforms as early as 2012. Utilizing platforms like Twitch he connected gaming audiences to new kinds of music - helping evolve genre movements such as Future Bass. Clarke's credits include working with The Flaming Lips on Disney's Fantasia: Music Evolved and collaborating with artists such The Glitch Mob, TOKiMONSTA, and REZZ on the creation of virtual concert experiences via Wave. booking/mgmt: Grimecraft@opg.tv