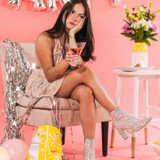 In 2016, singer-songwriter Morgan Johnston traded her coastal hometown of Cape Cod, Massachusetts, for the city lights of Nashville, Tennessee, a transition that quickly became a launching force into the music industry. She began by performing at writer’s rounds all around town and landed several major slots and live shows, opening for artists such as Madison Beer and Sawyer Brown.   In 2018, Johnston released her debut single, “Good Guy,” following it in 2019 with her next single, “Whatever Helps You Sleep at Night,” and “If He Never Broke My Heart” in 2020. Most recently on November 13th, 2020, Johnston released a duet with SixForty1 called “You Still Keep Me Up” which landed on major Spotify playlists such as Wild Country, New Boots, New Music Nashville, and Breakout Country. She was also selected by ASCAP as one of eight writers to perform in the GPS program with alumni artists Ryan Hurd, Lainy Wilson, and Hannah Dasher.   As a pop-country artist, Johnston would describe her sound as “a blend of Kacey Musgraves and Kelsea Ballerini,” being heavily inspired by both as well as other modern songwriters such as Lori McKenna and Maren Morris. Johnston’s songs feature raw and vulnerable lyrics expressed through smooth, delicate vocals, keeping true to the artists that inspire her while establishing her own sound.