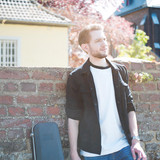 After playing in several bands with some renowned musicians (e.g. members of „Demon’s Eye“ and „Zeltinger Band“) Chris Weule presents his Pop-Songs as Singer-Songwriter since the beginning of 2017. He released his self-produced debut single „Dreamcatcher“ in June 2017 and was nominated for the German Rock & Pop Award in the category Singer/Songwriter. In June 2018 he released his first EP "Pasted", followed by the single "Who You Love" in 2020 and the EP "The Acoustic Sessions" in 2021.