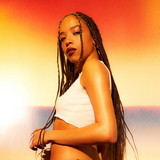 Say zhhh like a phone on the table, like a bee says hush, then put on an ayla and that’s Zsela who cried so spooky as a baby that all the neighbor dogs would pace outside her house. But doesn’t the story of a voice get duller with every line of background? Pinch your nose and say “before hitting the road with Cat Power, Zsela Thompson, 25, recorded a cover of Bill Withers' 'Grandma's Hands' at the age of 10.” Did you see her in Vaquera? Seducing Whitney and MoMA? Haunting stages? None of that explains her 200-year-old voice. No TV soundtrack or best of 2019 list shows the ghost behind her eyes when she makes the sound of clouds moving. About that sound: For three years, with producer Daniel Aged, Zsela refined her songs into recordings. “I was writing, but none of my friends knew I could sing,” she tells The New York Times. “Daniel and I built this world together.” They broke through quickly with a molten love eulogy called “Noise.” Turning heads bought them space to perfect the rest of Zsela’s song stash, but the odd anticlimax of fanfare also seasoned what was to come—an EP called Ache Of Victory. “OK, you won, now what,” she asks, in lieu of a title explanation, “victory is stagnant.” The paradox recurs in an EP that was as painful to make as it is pleasurable to hear. Same way that having the facts hits way different than wanting them. So shut this thing down and put Zsela back on. It’s not safe to read your phone while you’re driving around at night crying.