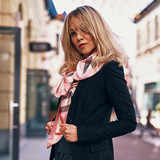 Yelena Vladimirovna Terleyeva (Russian: Еле́на Владимировна Терле́ева) (born March 6, 1985 in Surgut, USSR) is a Russian singer, best known for her hit Sun (Russian: Солнце).She was born in the family of a serviceman. Soon her family moved to Urengoy (Russian: Уренго́й), where she spent her childhood. Because of that, she has a very strong and purposeful character. Her mother was a teacher of music, so Terleyeva followed her mother's example. At first she played piano, but a few years later she began to sing. She finished in second place in the second season of Star Factory on Russian TV. She is also a winner of the Pesnya goda and Golden Gramophone Award.