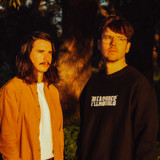 Australian brothers Jeff and Jonathan Hansen, otherwise known as Ekko & Sidetrack, have been turning heads around the world since their 2018 signing to Viper Recordings. With tracks such as ‘Exotic Robots’ and ‘Black Stone’ hurting dance floors everywhere, the brothers have secured a global fanbase of both punters and high profile artists alike. Their music has had support from Noisia, Pendulum, Dimension, Metrik, Matrix & Futurebound, Shockone and many more In 2020 they have already released the VIP of their track ‘Let The Light In’ featuring Reija Lee, dropped their highly anticipated bootleg of ‘Rushing Back’ by Flume (which has amassed over 300K views on UKF drum & bass) and most recently put out the single ‘Paper Birds’ with vocals by Ruth Royall to widespread acclaim.

With a lot of exciting new music and collaborations incoming very soon, now is the time to get acquainted with Ekko & Sidetrack.