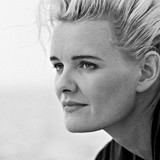 Swedish pop/rock singer Eva Dahlgren labored for a decade as a fairly popular performer in her homeland before experiencing exceptional success in 1989 with the song "Ängeln i Rummet" and then getting showered with critical acclaim in 1991 with her Grammi-sweeping follow-up album, En Blekt Blondins Hjärta. In later years she became known as a gay rights activist after publicly announcing her civil union to another woman in 1996 and officially changing her name to Eva Dahlgren-Attling. Also in later years she established herself as a book author. Born June 9, 1960, in Umeå, Sweden, she performed on the television show Sveriges Magasin in 1978 at age 18. Musician/producer Bruno Glenmark took note of her performance and approached her afterward, offering to produce her debut album, Finns Det Nån Som Bryr Sig Om (1978). A series of albums -- Eva Dahlgren (1980), För Väntan (1981), Tvillingskäl (1982), Ett Fönster Mot Gatan (1984), Känn Mig (1984), Ung Och Stolt (1987) -- followed, as did a number of accolades, including a few Rockbjörnen awards for Swedish Female Vocalist of the Year. Dahlgren's steady success culminated with "Ängeln i Rummet" (also released in English as "Angel in My Room"), a single from her 1989 album Fria Världen 1.989. Her follow-up album, En Blekt Blondins Hjärta, built upon the success of "Ängeln i Rummet," spawning not one but two additional international hits -- "Vem Tänder Stjärnorna" (released in English as "I'm Not in Love with You") and "Kom Och Håll Om Mig" ("Just Want You to Love Me") -- and sweeping the Grammi Awards with five wins (Artist of the Year, Female Vocalist of the Year, Album of the Year, Song of the Year, and Songwriter of the Year). In the wake of this all-around success, she released an English-language version of En Blekt Blondins Hjärta, Eva Dahlgren, in 1992 as well as a greatest-hits compilation, För Minnenas Skull 1978-1992. Dahlgren's output slowed in subsequent years, with only two more studio albums (Jag Vill Se Min Älskade Komma Från Det Vilda, 1995; Lai Lai, 1999) and a live album (La La Live, 1999) released during the remainder of the decade. She finally returned in 2005 with Snö, her first solo album in six years (not counting her contribution to the 2003 collaborative Buddaboys album Lost People Area), and also the Äventyr EP. In 2007 she returned again with another greatest-hits collection, En Blekt Blondins Ballader 1980-2005, and a new studio album, Petroleum Och Tång. ~ Jason Birchmeier, Rovi