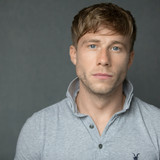 Tom Gill is a Salfordian singer-songwriter, actor, and award winning spoken word artist, known for his delirious dexterity, poetic heart, and tongue in cheek lyricism. He has featured on eclectic stages including Lovebox and Latitude Festival, spent 10 days in complete silence, and once stabbed Michael Fassbender (on the big screen) Tom taught himself to play guitar as a kid. He recorded his first EP in Year 9, all about his high school chemistry teacher Miss Timothy. This 7 track magnum opus entitled ‘We’ve got Chemistry’ was made on

Ultimate Dance Maker 2000. Tom planned to sell copies to his classmates before hitting the big time, but sadly (or perhaps luckily) his Dad snapped the master CD, and it never saw the light of day. Despite the scars of his youth, Tom pursued his passions regardless developing his craft as a resident artist at Camden’s prestigious Roundhouse. He was crowned UK Poetry Slam Champion in 2015 and his solo show ‘Growing Pains’ enjoyed a sellout run at the Edinburgh Fringe. The multifaceted play-come-musical later transferred to the Royal Exchange in Manchester, and has been published by Playdead Press. Inspired by the likes of Mike Skinner, John Cooper Clarke, Alex Turner and Eminem, Tom brings a fresh spin to indie/acoustic music. Soon to be starring in BBC’s next big thriller Vigil, and releasing his debut EP ‘Shake The Taste’ - 2021 is shaping up to be an exciting year! ‘as fresh and original as they come’ (Reviews Hub *****)