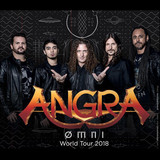 Angra was formed in 1991 in São Paulo, Brazil, influenced by bands such as Helloween, Queensrÿche and Iron Maiden. Their style is a mix of power metal, classical music, Brazilian music and progressive rock, ranging from heavy, intricate songs to beautiful ballads. The virtuosity of the players has always been on of the band`s most praised assets. Angra`s first album, Angels Cry, went gold in Japan and was very acclaimed in Europe and their home country. The follow-up, Holy Land, helped solidify the Brazilian influence and set the band apart from the traditional power metal scene. The band became very influential for generations of bands from around the world, and has stood the test of time through line-up and structural changes (guitarist Kiko Loureiro joined Megadeth in 2015). Every album has a unique feel , some more uplifting, some more somber, and this became a trademark. Rafael Bittencourt, the band`s founder, is the creator of the main lyrical concepts from most albums, telling stories that are permeated through the different moods of each song. The band is currently working on its 9th studio album, entitled Omni, which will be released worldwide in early 2018. The album is being produced by the renowned Jens Bogren in Sweden, and will first be performed live in a 26-date European tour starting in March. Angra is: Fabio Lione - vocals Rafael Bittencourt - guitars and vocals Felipe Andreoli - bass Marcelo Barbosa - guitars Bruno Valverde - Drums