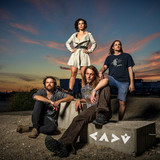 CADÛ is a 4 piece ProgRock / TripHop formation hailing from Vienna Austria. With band members emerging from all corners of the Viennese underground scene, Cadû benefits from a vast variety of stylistic influences ranging from Trip Hop to Jazz from Prog Rock to contemporary music and theatrical elements. Their songs are mirrors and reflections of deep rooted subconscious dreamworlds hitting the 21st century human experience. Cadû commit to the principle of radical expression as a free art form: By creatively breaking social as well as musical norms the band aims to inspire listeners to move beyond their own borders. This way Cadû opens up space for everyone and appeals to a wide audience regardless of its background. Within the past 2 years, CADÛ have established themselves as an intense live act, drawing the listener into their world and growing a loyal fanbase. While playing shows all over europe, they've been sharing big stages with bands like "Motorpsycho" in one of the most renowned rock venues and even toured through Austria with "Tito and Tarantula". Moving the audience through an almost trance-like state, the band also opened up the "Masters of Puppets" music festival as a part of a shamanic ceremony. In 2019 they released their debut Album STEELSTREET, which was recorded in Timisoara, Romania in 2018.