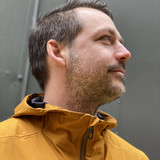 "Brint’s lyrics, as a whole, sit comfortably somewhere between universally simple and intelligently poised. An old school, no frills, folksy country singer-songwriter. Highly recommended. 9/10" - AmericanaUK A small island with dirt roads and no police is a magical place for a young kid with a big imagination. Jesse Brint’s take on folk/country music is simple and honest like the island he grew up on, an island with an eclectic cast of characters, plenty of heartbreak, but always an underlying hint of hope. Raised on a mix of John Prine, Bob Dylan, Bob Marley and Van Halen, Music was always a part of Jesse’s life. Forming a punk band and booking his own shows from the age of Fifteen made Jesse no stranger to the stage, leading to over twenty years of chasing the love of performing live, be it in Heavy Metal, Punk Rock or Folk/Country acts, but it took the loss of a close friend and music collaborator to really break Jesse in two, open him up and convince him to share his stories through song. These experiences and stories grew over the years and recently culminated in a recording session at Protection Island Studios with Jonathon Anderson (Jon and Roy, Said The Whale) which resulted in a five song EP that was released on his 40th birthday, Nov 17th, 2020.