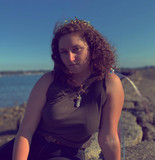 Mary Ellen Hawkins, known professionally as Mel, is a genrelust songwriter, vocalist, multi-instrumentalist and producer who draws inspiration from the world around her. Often likened to the stylings of Alina Baraz, Mazzy Star and Maggie Rogers, Mel frequently receives praise from listeners for her healing voice & poetic lyrical work. Mel, who has been making music her whole life, began her professional career performing at venues around her home-cities of Newport, Rhode Island and Boston, MA & has since shared stages with Matt Hartke (Recording Artist & Billboard Top 40 Platinum-Selling Songwriter), Troy Ramey (The Voice Top 12 & Breaking Singer/Songwriter, Apple Music) and more. Throughout 2020, Mel partnered with many artists to release collaborative projects including ‘things i wish i said but didnt’ EP with soulecist. which garnered recognition worldwide. With her debut EP coming later this year, there’s a lot to be on the lookout for with this songstress! Mel livestreams on Twitch every Tuesday at 7pm EST https://www.twitch.tv/musicbymelx