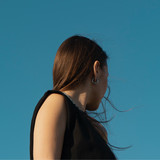 Aimée Portioli is a Dutch-Italian composer and sound designer who records and performs as Grand River. Her music infiltrates electronic experimentalism with a cinematic touch, placing an atmospheric lens over complex rhythmic structures. These lush and peculiar landscapes blur long-form transitions with suspense. Influenced by classical minimal music, Grand River’s work integrates a large variety of sound structures and symphonic calculations in which she crafts absorbing experimental and ambient narrations combining traditional composition with contemporary sound research. In 2020, Portioli released her sophomore album “Blink A Few Times To Clear Your Eyes” on Editions Mego, following the album “Pineapple” released in 2018 on Spazio Disponibile, along with features on Ghostly International, Tresor and the Australian Longform Editions. Her first release Crescente, in 2017, has been named among the best releases of the year by XLR8R. Since then, her work has been presented at festivals and venues across the world, including Berghain, Mutek, Mapping Festival, Horst Arts & Music Festival, Le Guess Who, De School, The Labyrinth, WOS Festival, Funkhaus, and many more.

Grand River works with the visual artist Marco Ciceri, with whom she runs the record label One Instrument and sometimes presents A/V performances.