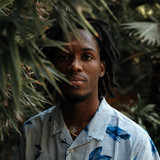 A successful black independent artist, Saba has rooted his career in an authenticity and musicality that’s made him one of this generation’s most important and unique voices. The Chicago polymath is working on the follow-up to his critically-acclaimed 2018 album CARE FOR ME, for which he earned honors as one of the Tribune’s Chicagoans of the Year and has performed 100+ shows worldwide. CARE FOR ME is a significant and devastating release that finds Saba grappling with the aftermath of his cousin John Walt’s 2017 murder. “The specificity with which Saba renders his personal inventory of survivor's guilt, toxic relationships and internal struggles, while swimming against a rising tide of systemic injustice, elevates CARE FOR ME from mere tragedy to living tribute,” wrote NPR, naming the release their #1 Hip-Hop Album of the Year. Saba began making music at age 8 and was writing and producing songs by early adolescence. Building a recording studio in his Grandmother’s basement on the Westside of Chicago, he and a group of neighborhood friends formed Pivot Gang and began taking trains across the city to join creative youth organizations and perform at open mics. These experiences sharpened his writing and performance skills, and he has continued to build home studios where he is self-taught on a variety of musical instruments. Having moved to L.A. in 2020, Saba is prepared to continue pushing musical boundaries on his climb to rap’s upper echelon.