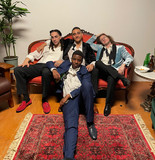 3409 is an alternative pop/hip-hop band from Toronto, Canada consisting of vocalists Dante and Ro as well as producers Danny Del and Izzy. What started off as a Music Business project quickly evolved into an outlet for creativity centered on fusing dance, hip-hop, and alternative rock. While remaining unbound to a single genre, our signature sound is rooted in charisma, playfulness, and openness to experimentation.   We just released our latest single "Hey Is That You" which was written over FaceTime during the pandemic. Centered around the bittersweet nostalgia found when thinking about losing someone you love, it is a light departure from our usual "happy-go-lucky" fare. The song combines the pop rap/alternative r&b sensibilities of Bryce Vine, blackbear, and Post Malone with a bit of melodrama a la mid-00's alternative rock.   Stans of: Bring Me The Horizon, Col3trane, Drake, Future, and KAYTRANADA.