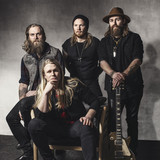 More than 2 million streams and 64.000 + monthly listeners on Spotify, no. 1 on the official vinyl hitlist in Denmark, and over 100 live shows. This is among others, what Junkyard Drive has achieved since the beginning in 2014. They have, toured Scandinavia, Northern Europe, Baltic Nations, the United States, and Mexico. In 2018, they played at the legendary Sweden Rock Festival side by side with Iron Maiden, Judas Priest and Ozzy Osbourne, and in fall 2019, they will be supporting Swedish Eclipse throughout Europe. They have started their journey outside the boundaries of Denmark, but they are definitely hungry for more! Two albums have been released from the Danish hard rockers in the past two years, both praised by critics and fans. Guitar legend and producer Soren Andersen (Glenn Hughes, Marco Mendoza, Electric Guitars) calls Junkyard Drive the most promising band on the Danish hard rock scene and appoints the lead singer with the title ‘the best rock vocalist in Scandinavia’. Junkyard Drive have clearly moved from the first to the second album, and it is a pleasure to hear how the guys have developed their own personal sound. The four guys, Kris (Vocal), Ben (guitar), Claus (drums) and Sjus (bass) are hardworking individuals who take the mission of “becoming the largest rock band on earth” VERY seriously.