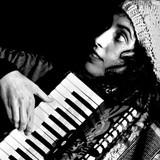 Natalia Kotsani, is the lead singer and percussionist of the acclaimed band encardia, touring and giving seminars throughout Europe, having linked her name with the world jazz music and the songs of the Mediterranean. She is a singer, composer, producer, pianist, accordionist and percussionist, and since 2009 she has been producing and presenting her solo projects. Her research interests pertaining to the traditional musical vocal idioms of the Mediterranean and world jazz music, the vocal techniques and analysis while she is a researcher in Artificial Intelligence and Computational Ethnomusicology fields, designing and implementing prototype music systems. She has released two personal albums, two albums with encardia band and she is featured in two albums of the acclaimed artist Lavrentis Machairitsas and an album of Spyros Labros Greek Choir. Either as a member of the encardia, or independently, she has collaborated with the Nuova Compagnia di Canto Popolare, R. Licci, L. Machairitsas, M. Farantouri, S. Giannatou, A. Ioannidis, Ludovico of Anogia, H. Yazdjian, E. Pagliara, A. Villani, E. Magnolo, D. Savvopoulos, G. Dalaras, Estudiantina Orchestra etc, in the largest concert halls and festivals of Greece (e.g. Odeon of Herodes Atticus, Panathenaic Stadium, Athens & Thessaloniki Concert Halls, Epidavrus, Athens Festival, Niarchos Foundation, Onassis Foundation, Technopolis, etc). She has also performed with encardia in Germany, Italy, Switzerland and Cyprus.