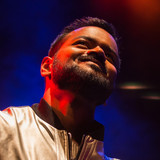 Soumik Datta is a composer, television presenter and sarod player. He has collaborated with Beyonce, Jay-Z, Bill Bailey, Nitin Sawhney, Talvin Singh, Joss Stone, Akram Khan, London Philharmonic Orchestra and City of London Sinfonia to name a few. Born in India, brought up in London, he connects his Bengali roots with global strands and is considered 'one of biggest new music talents in Britain’ (Vogue). Soumik’s 2019 highlights include performances at Glastonbury, WOMAD and BBC Proms. Recently he presented Rhythms of India (BBC) and Tuning 2 You (Channel4, Discovery). Through his albums, live tours and broadcast series, Soumik continues to champion traditional South Asian arts and bring his ancient sarod into the modern, global arena. In November 2019, Soumik releases his latest album and music video ‘Jangal’ - a protest against deforestation and the climate change crisis. Jangal is a vibrant tangle of songs that roar against the wreckage of our planet. Unruly and cinematic in scope, this is Soumik's most powerful release yet.