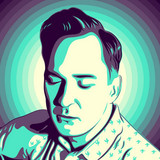 The Beatles, Zombies, Kinks, Breeders, Cars, Flaming Lips, Badfinger, Yes, and Debussy make up just some of the many layers of the Warhol-esque sonic pop art painting that is The Stan Laurels. Big Stir Records recording artist The Stan Laurels are the musical creation of earthling Sound Scientist John Lathrop. The epitome of “indie,” John takes independent ownership as he writes/performs/records/produces every sound & visual. John believes the significance of music and its impact on our lives cannot be understated; after all, it was music that brought him and his soul-mate together. Thus, The Stan Laurels are the culmination of John's musical vocabulary and drive to record the perfect song. The result is a big, lush, multi-layered sound that feels both vintage and modern. The music spans a myriad of styles that show John's range - a range so broad that he's added Film Score Composer to his résumé and two film soundtracks to his catalogue. MAYBE (2018) was a power-pop breakthrough, garnering worldwide airplay and landing on several Best Of 2018 lists. The pinnacle of these accolades was an Independent Music Awards nomination for Best Indie/Alt Rock Album of 2018. John followed up the success of MAYBE with singles "Lost & Found" and "Noche Buena," the latter nominated for Best Holiday Song at the 2020 Independent Music Awards. THERE IS NO LIGHT WITHOUT THE DARK is the new LP, a dynamic cornucopia of mellow and heavy, salty and sweet, and - yes - light and dark!