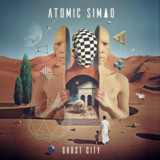 Atomic Simao is a mixture of psychedelic & space rock with a trippy sauce of acid jazz. The child of a great wave of 60’s and get its big inspiration in electronic music of 90’s. A ukrainian group playing instrumental psychedelic jazz, which is rare for the domestic scene. Having formed just 5 years ago, today the band has already managed to release three albums, two of which were released on vinyl by the greek label Cosmic Eye Records, called “the opening of the year” at the Koktebel Jazz Festival, opened the concerts Red Snapper (three times), The Herbaliser (UK), Psychic TV (UK), received the title of “Best Underground Group of the Year” and the title “Album of the Year” in Ukraine , their tracks were released in America on the same compilation with CAN, Hawkind and Alice Cooper and also to present Ukraine at the SZIGET Festival in 2017 Fasten your seat belts and get ready for the take-off! Listen to Atomic Simao with headphones on, eyes closed and a mind open to any changes the universe might bring to your listening perception.