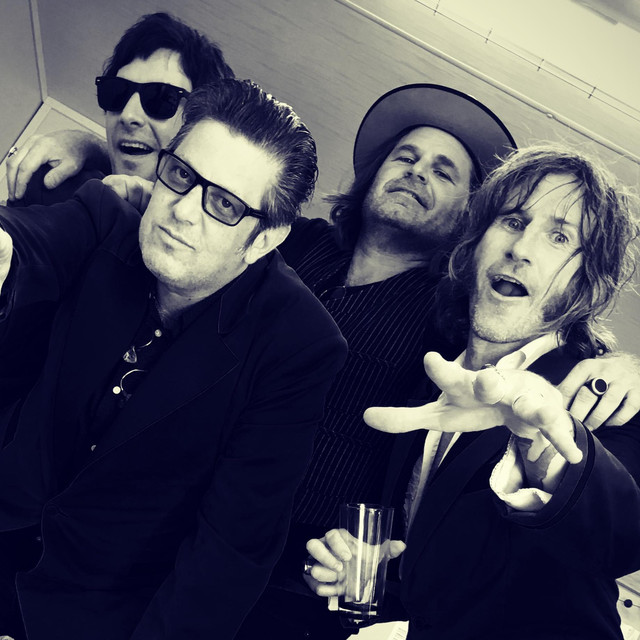 Featuring You Am I

Centered around the prolific songwriting skills of singer/guitarist Tim Rogers, pop group You Am I was one of the most successful and internationally admired Australian bands of the '90s. At home, they've scored three number one albums, Sonic Youth and Soundgarden are counted among their admirers, and Silverchair even named themselves after a You Am I song. Their influences combine the Who, the Small Faces, the Jam, the Clash, and the Replacements. Rogers formed his first band while studying arts/law at the Australian National University in Canberra, before forming the first version of You Am I with his school friend Nik Tischler and Tim's older brother, Jaimme, in December 1989. (The band name came from a conversation at a gig with a spaced-out fan spouting "You am I, I am you" philosophies.) Jaimme left the band after a fight with brother Tim at the end of 1990. Tischler left of his own accord because he didn't feel he could realize Tim's vision musically. Ultimately, they were replaced by the group's one-time sound mixer Andy Kent (bass) and Russell Hopkinson (drums), creating the classic three-piece rock lineup that has become the core of the band. Their breakthrough came at the inaugural Lollapalooza-style Big Day Out concert in January 1993. Lee Ranaldo of Sonic Youth was impressed enough to produce their fourth EP, Coprolalia, followed by eight days spent in Canon Falls, Minnesota, where Ranaldo helped produce the band's first album, Sound as Ever. Steeped in stripped-back guitar-riff pop delivered with Tim Rogers' characteristic strained vocals, Sound as Ever won You Am I the 1993 Australian Recording Industry Association award for Best Alternative Release. (One of the album's singles, "Berlin Chair," later provided Silverchair with half its name.) During the following year's Big Day Out concert tour, You Am I captured the attention of Soundgarden, who invited them to fill the support spot on the band's next American tour. You Am I took time off during September 1994 to record another album at Green Street Studios in New York. Full of concise pop songs, Hi Fi Way earned You Am I the first of its Australian number one albums, plus a handful of ARIA awards. The '60s retro concept album Hourly, Daily followed and was recorded and produced locally in Sydney. In June 1998, You Am I released the return-to-basics album #4 Record. The following year, You Am I invited friends and fans to a warehouse in Melbourne and over two nights recorded the live album Saturday Night, 'Round Ten. The group released its next studio release, Dress Me Slowly, in 2001. It featured new guitarist Davey Lane. The album was met with some success, with singles like "Damage" and "Get Up" hitting the Australian pop charts. Their next album didn't fare as well; 2002's Deliverance had a lukewarm reception, and several of the group's members opted to pursue side projects over the next four years. Rogers released two albums with the Temperence Union, while Lane performed with the Wrights at the 2004 ARIA awards and appeared on the Pictures' 2005 album Pieces of Eight. Rogers made headlines in 2004 when he got into a fistfight with Australian Idol host Mark Holden at an Australian airport. There were also reports that he was too inebriated to finish a set at that year's Falls Festival in Tasmania. Undaunted by these disruptions, however, the band went back into the studio in 2005 to record their seventh album, Convicts, which was released on Virgin and Yep Roc in the U.S. the following year. 2008 saw the release of their eighth album, Dilettantes, produced by Greg Wales and featuring the single "Erasmus." The album peaked at number 12 on the ARIA album charts. Parting company with Virgin in 2010, the group released their self-titled ninth album on new label Other Tongues that same year. Heading to New York in 2015 with some 50-odd songs written by Rogers, the group set about recording their tenth album at the Daptone Studios in Bushwick. With production work by John Castle finished in a few days back in Melbourne, the band released Porridge & Hot Sauce at the end of 2015 on independent Australian label Inertia. ~ Ed Nimmervoll, Rovi