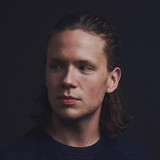 Halldór Eldjárn is an Icelandic musician and a programmer. His music is a collision of the technological and the organic electronic worlds. Having played drums from a young age, Halldór started writing his own music and formed the electro-pop band Sykur in 2008, but they have released three critically acclaimed albums and traveled the world. Halldór's music is electronic yet organic in texture. His debut album Poco Apollo is an incarnation of a computer generative music piece written around NASA's photo library from the moon landing, converting ~14.000 photos from the moon to musical landscapes using programming and generative music methods. Halldór has previously collaborated with prominent Icelandic artists Björk and Ólafur Arnalds on music and tools aimed at bringing computer generation in to the artist's creations.