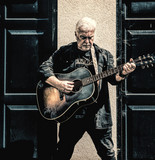 Hailed as, “A competent and classy 21st Century Bluesman” by Fatea Magazine and “Brim-full of positive vibes, humour and innovation” by RnR Magazine, Ged Wilson is wowing audiences with his blend of acoustic blues roots jazz fusion. He has toured the nation, jammed the blues clubs, hit the festivals and had two sell-out tours of France. With four solo albums, much radio airplay and favourable reviews Ged is now making his mark. Based in Cheltenham, Ged (that’s Jed with a G!) grew up in Manchester, a city with a great musical heritage, and cites John Mayall, “The Godfather of British Blues” as an early influence on his own distinctive song writing style. On stage, Ged creates guitar vibes, harmonica wails and from-the-heart vocals, spiced with a dash of laconic humour to give a full-on, upbeat show.