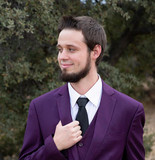 liL Fytr’s story goes back to 2008 when he was sitting in a high school theatre class and decided to write a rap about how he’d gotten burned by his crush of 4+ years. His classmates he showed it to loved it, and thus Please Don't Go became the first song he ever wrote. After he found Jesus in 2010–or, after Jesus found him—he decided to keep rapping, but focus more exclusively on Christ and the Scriptures. Thus, L.I.L.F.Y.T.R. was released in 2012. Now, after earning a BA in Biblical Studies from Southwest Baptist University in 2015, he enjoys reading, writing, preaching, and continuing to rap about the Gospel of Jesus Christ that forever changed his life. Thank you for giving him a listen. If you’re led to better love Jesus as a result of his music, he is thankful. Soli Deo Gloria Solus Christus