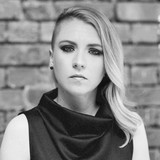 Hannah Scott draws much of the inspiration for her music from her affinity with Italy. A year living and working on an olive press in rural Tuscany in her late teens provided the backdrop to her early work and she has found her musical home with creative partner Stefano Della Casa. When they began making music, they realised they had an amazing connection, despite very different backgrounds: Stefano had a troubled early adult life, while Hannah was lucky to have a happy upbringing. Hannah has had her own difficulties following the recent diagnosis of Axial SpA, a form of arthritis which causes severe joint pain and fatigue. Both artists firmly believe that their musical collaboration has provided an outlet to support each other through difficult times. They have just released "Drawn To Darkness", an album funded by Help Musicians UK and a successful Kickstarter campaign. Hannah’s music has been heard on hit TV series, Grey's Anatomy and has been played regularly on the BBC with support from Dermot O’Leary and Bob Harris on BBC Radio 2 and Tom Robinson on 6Music. She’s been featured by MOJO, The Guardian and Clash Magazine. Recent live highlights include opening for Madeleine Peyroux to an audience of 2000 at Edinburgh’s Festival Theatre and travelling across Ireland with Paddy Casey to open for him in Dublin and in a tiny Irish speaking village near Galway!