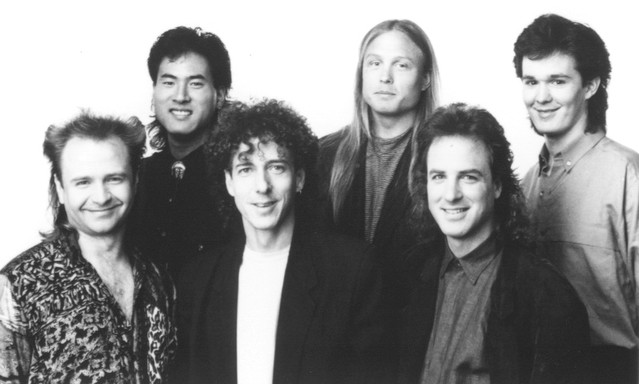 One of the most successful smooth jazz saxophonists, Jeff Kashiwa made his name as a member of the popular group the Rippingtons. Born in 1963 in Louisville, Kentucky, Kashiwa moved early on with his family to Seattle, where he started out on the clarinet (a gift from his father) at age ten. However, it would be two years before he switched to saxophone. Influenced by such smooth jazz progenitors as Chuck Mangione and Spyro Gyra, Kashiwa eventually moved to Boston to attend the Berklee College of Music and developed an interest in straight-ahead jazz -- a style that often colors his live performances. His hard work paid off when he landed the second alto chair in Disney's All American College Band. Kashiwa found he liked Southern California and transferred to Cal State Long Beach to work on his Bachelor of Music. During this time he toured with the ska/reggae group the Untouchables, performing on MTV's first Spring Break. Later, while working at a grocery store by day and playing at night, Kashiwa hired bassist Steve Bailey -- then with the Rippingtons -- to play on a gig. Bailey introduced Kashiwa to the Rippingtons' pianist and leader, Russ Freeman, who hired Kashiwa in 1989 when the group's original saxophonist, Brandon Fields, left the group. It was during this time with the Rippingtons that Kashiwa recorded two solo albums, Remember Catalina in 1995 and Walkamile in 1997. Then, in 1999, he left the Rippingtons to concentrate more energy on his own band, Coastal Access. Kashiwa's solo career has been in joyfully frenetic overdrive since the success of "Hyde Park (The Aah, Ooh Song)," a number one hit on the Radio & Records airplay chart for over eight weeks in 2000. His Native Language debut, Another Door Opens, and its more acoustic-oriented 2002 follow-up, Simple Truth, established him as one of smooth jazz's most dominant saxophone voices, and he consistently performed 60-80 shows annually with Coastal Access in addition to heavy gigging with artists like Joyce Cooling, Chieli Minucci, Acoustic Alchemy, and frequent collaborator and co-producer Chuck Loeb. In 2006, he reunited with the Rippingtons for the group's 20th anniversary tour and appeared as a guest on the band's 20th Anniversary release. In the summer of 2007, he was featured on more live dates with the Rippingtons and released his fourth Native Language disc, Play. The following year, he joined fellow saxophonists Kim Waters and Steve Cole in the supergroup the Sax Pack before returning to his solo work with Back in the Day. He then contributed to David Benoit's Earthglow, and appeared on the Rippingtons' Modern Art and the South of France-inspired Côte d'Azur, before delivering his eighth studio album, 2012's Let It Ride. Also that year, he was back with the Rippingtons for Built to Last. More guest shots followed, including spots on albums with Brian Culbertson and Willie Bradley. The Sax Pack's aptly titled third studio album, Power of 3, appeared in 2015. In 2017 Kashiwa released Fly Away, featuring appearances by Marc Antoine, Acoustic Alchemy's Miles Gilderdale, Tom Schuman of Spyro Gyra, and others. ~ Jonathan Widran, Rovi