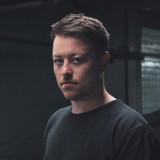 Creation and iteration form the center of Hollt’s drive; whether in the studio creating music, on the workbench iterating on his self-made controllers, coding new DAW plugins or directing one of his live sets. Notes and nodes, mixing and modelling, coding and composing - it really is all the same for the cum-laude conservatory graduate. In recent years, Hollt, a.k.a. Jeffrey Frugte, has been steadily solidifying his name; merging melodic elements with a defiling energy, creating stories and blending genres. Hailing from the Netherlands, Hollt moves comfortably between both Berlin’s melodic techno scene, resulting in the underground hit ‘Halos’ on Jonas Saalbach & David Guzy’s Radikon, as well as his UK friends leading to BBC Radio One support on ‘Fusion’, released on ZeroThree. With his own label ‘die Stube Records’ he has an outlet that allows for full creative and creator control, most recently releasing his collaboration with Lake Avalon called ‘Anomia’. On stage, Hollt creates a world between techno and house, either DJ’ing or playing live with the Holltesizer. Heavily supported by the likes of ARTBAT, Mathame, Adriatique, Innellea, Kevin de Vries, Fideles, Coeus, Eelke Kleijn, Jonas Saalbach, Karotte, Nico Morano, Miss Melera, Olivier Weiter & more, his music is now reaching more people every day in both his worlds; online and offline. There’s no next steps, just constant creation, iteration and excitement to take you on this journey!