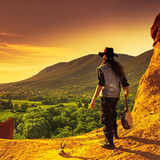 Skyërn Aklea is a French musician / singer / songwriter playing Rock ballads and Country music, singing songs about alcohol, girls, roads, Rock'n'Roll and many more.. His debut album HEMOZAS Y MEMOROS was released on October 2013. It talked about a guy we get to know from his birth to his suicide. The story of someone who killed his girlfriend's parents and has lost everything in his life. His new album LOST IN THE DAYS (September 2017) talks about hard issues like depression, alcohol troubles, girls, and paranoia. But also party. Because partying is fun. This new album relates true stories (except for two songs or three).