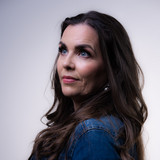 Angela Mahon has been using her powerful, evocative voice to spread the word of God in community and church for over twenty years. Born and raised in the south of Ireland, Angela envisions a world where Christians can come together as one, joining in song to celebrate Jesus in all his creations. Angela is an exciting new voice in contemporary Christian music, one who will bring her listeners closer to God. In 2007, Angela met her husband Robert while the two were serving as Music Ministers for the CASA Community. It proved to be a serendipitous meeting, as the two quickly found themselves to be musical soulmates. In the summer of 2008, they released their first collaborative album titled ‘Divine Friendship.’ With lyrics and music written by Angela and arrangements scored by Robert, the album brought them closer together and was the beginning of a long, fruitful relationship, initiated by a proposal of marriage during the work on this album. Angela wrote countless songs along the way, releasing several of them and an EP in 2019, but most importantly, she fully committed herself to serve God through song. Upon listening to her sing, it becomes immediately apparent that God’s spirit is alive inside Angela’s heart - that her songs are rooted in unwavering faith. Angela intends to do everything in her power and through the grace of God to continue using her voice and writing songs to spread joy to her fellow believers for years to come.