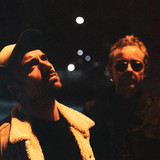 No Money Kids is back with a captivating new sound shaped by powerful indie-rock and contemporary pop-culture. Forerunners in the new DIY generation that's reinventing itself everyday, their lastest album, Trouble, features reckless riffs ripping through the hollows of a smoky electronic mist. The Kids repeatedly surprise and astonish during this new and captivating musical journey. Their sound first clicked during the studio gig where they met and it wasn't long before they were drawing media attention during Parisian concerts

and international festivals. Several singles were quickly picked up to be used in TV series like Banshee, Night Shift, Veep (with Julia Louis-Dreyfus), Killjoys, Goliath (with Billy Bob Thornton), Dollar and in movies such as Misconduct (with Al Pacino and Anthony Hopkins) and Baby, Baby (with Bradley Cooper). Their tracks seduced not only music-lovers but the world of fashion, and titles were used in shows by Schwarzkopf, featured in Stylist and Glamour,