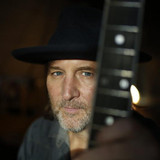 With the Feb. 1, 2019 release of Reed Foehl’s 5th solo album, Lucky Enough, fans will get a cathartic collection of 10 songs that Foehl recorded with help from musical force The Band of Heathens, produced by Ed Jurdi & Gordy Quist at their Finishing School studio in Austin, TX. It’s an album that will undoubtedly solidify his standing as one of the most compelling Americana artists around. Foehl touches on a range of Americana styles, all with emotionally charged lyrics & choruses, from somber folk elegies (“Stealing Starlight” and “American Miles”) and gospel-tinged tunes (“Carousel Horses”) to barroom country singalongs (“Long Time to Make Old Friends”) and jaunty calypso-flavored, country-infused pop (“Wish I Knew”). These are deeply personal songs for Foehl and while they were written during some dark days, there’s a sense of optimism and gratitude, an overriding feeling that the hope outshines the heartbreak. In 2017 Foehl was heading to Nashville to continue his craft as an artist & songwriter. That made sense after co-writing the leadoff song (“Fly”) with up-and-coming country singer/songwriter Brent Cobb on Lee Ann Womack’s 2014 Grammy-nominated album, The Way I’m Livin’. ​On the way, he got a call from his mother, Linda. She had lymphoma and she needed him. He didn’t hesitate, ditching his fully loaded car in Nashville and flying straight home to Massachusetts. In that year and a half taking care of his mom, he wrote most of the songs you will hear on Lucky Enough.