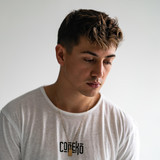 UK Native Ed Clark, better known as Codeko, is a classically trained musician turned electronic producer from London. From first learning piano at the age of 5, he established himself in the electronic scene whilst studying at the University of Cambridge for his Masters degree in Physics. Having toured with Audien, Matoma, Two Friends and performing on the stages of Tomorrowland, Electric Zoo, Life in Color, and Mysteryland, Codeko has just begun to immerse himself into his craft. His original "Walking With Lions" (Armada), was voted SiriusXM BPM Breaker of the Year, after being selected the official Electric Zoo Anthem. His unofficial remix of Marshmello’s “Silence” hit #1 on Sirius XM's BPM countdown, and his hit single “Say Hi” (Astralwerks) has collected over 15 million streams to date. After releasing several records for Enhanced Recordings as a teenager, he caught the attention of many of his industry peers - dance music icons Tiësto, Oliver Heldens, and Gryffin in particular - and went on to release several originals and remixes on Musical Freedom, Heldeep Records, and Darkroom Records. Continuing to impress with his diversity, he released “Bad At Being Alone” (Musical Freedom), Woke Up ft. Xuitcasecity (EMPIRE), “Just Got Something” (Armada), and was even tapped by Charlie Puth for an official remix of “Mother”. Achieving this much with so much still to come, the future is bright for Codeko. Management | collin@samsara-artists.com