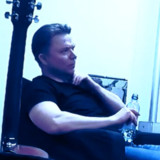 Singer/songwriter out of Oslo, Norway. Currently working on an album that will be released in the fall of 2021. One single has already been released: "Ride". The last album "Så Går En Dag" was released

august 14th 2020. This is an album with 9 songs in Norwegian and has been played on several radio channels in Norway. His first singel "Verden", in Norwegian,