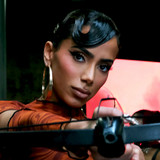 Since her breakthrough in Brazil six years ago, Anitta has become the leading artist of a new generation of Latin American music. As the biggest ever global female popstar to come from Brazil, she has amassed 50 million Instagram followers and over 15 million YouTube subscribers garnering more than 5 billion views. In July 2013, she released her self-titled first album, Anitta, followed by Ritmo Perfeito, in July 2014, and Bang in 2016. Her last album, Latin GRAMMY® nominated Kisses, was released in April 2019 and marks Anitta’s first trilingual album with songs in Spanish, Portuguese, and English. Since 2014, Anitta has been named “Best Brazilian Act” at the MTV Europe Music Awards for five consecutive years. She was a highlight of the 2016 Rio Olympic Games’ Opening Ceremony, where she performed alongside Brazilian singers/songwriters Gilberto Gil and Caetano Veloso. Anitta has worked with the likes of Madonna, Major Lazer, J Balvin, Diplo, Ozuna, and Maluma among others. Her latest hits include "Girl From Rio", "Loco", “Me Gusta” with Cardi B and Myke Towers, “Tócame” feat. Arcangel & De La Ghetto and “Fuego” with DJ Snake and Sean Paul. Anitta is currently recording her anticipated new album.