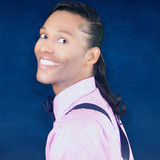 Pop musician Richard Smith-Beverly is a vocal chameleon, whose vocals blend seamlessly with other singers, musicians, or even the warmth of his voice, as is the case in his newly released acapella arrangement. Richard's skillful acapella arrangement of the American classic "America the Beautiful" takes the listener on a vocal journey showcasing all the octaves in his vast range, from deep low notes to soaring highs. His voice is ethereal, his musicianship is entertaining, the beat is encompassing, and overall it's enlightening. Enlightening new listeners to his well-crafted arrangements, vocal ability, precision, and prowess. Richard's recent accomplishments include a successful worldwide radio campaign of his song "Christmas Is Only Christmas With You" with Stephen Wrench of Musik & Film, radio programmers across the U.S. and abroad added it to their rotations. Last year, Richard teamed up with Danish producer Laitos for a remix of "Christmas Is Only Christmas With You" releasing a Spanish version of the song as well.

Richard is currently in the studio working on some original patriotic songs and some arrangements of the classics for his new EP. He plans to release a music video for his latest track "American Made". "American Made" is Richard's biggest production to date, featuring live strings, horns, and a guitar-based rhythm section. "American Made" is an inspirational and uplifting song and is slated for release digitally Thursday, October 22, 2020.