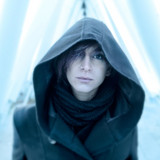 Munsha is the alias of Daniela Lunelli, an Italian vocalist, cellist, sound designer, performer and music educator based in Berlin since 2014. She began studying piano at the age of eight. Soon after, singing and cello became increasingly her areas of interest, which culminated in 1997 in studying at the Conservatory of Music “G. Martucci” of Salerno. After graduating in Opera singing under the guidance of maestro Daniela Del Monaco and Multimedia Composition [M.A.C.M.], she attended workshops and continued education courses at the International Academy of Music in Milan, the Conservatory “C.Pollini” of Padua, with the vocal coach Mario Castiglia and the cellist Riccardo Agosti. Simultaneously, she trained as an Editor, Sound Designer, Producer and Post Production Producer with Italian film institutions such as Cinecittà, Fonoroma and International Recording. Thereafter, she devoted herself entirely to her own musical productions, inspired by Dead Can Dance, Philip Glass, Steve Reich, Nine Inch Nails and Bauhaus. She shifted to contemporary and electronic music and the research of new languages, testing new forms of “sound dialogues,” alternating on stage cello-voice performances with electronic live-sets. Her dual background - academic and as a stage musician - created a style in which the rhythmic grit of rock music nestles and coexists in unconventional harmonic structures; concrete sounds merge into Dark Wave melodies; harmonic suspensions into electronics. <br>