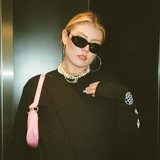 I've probably written a song about you - 21-year-old singer-songwriter Dasha grew up in San Luis Obispo, California, immersed in the world of dance, acting, and music. From the young age of 12, she has been writing and performing her music with help from her older brother and producer, Bardo (Trevor Daniel, Beauty School Dropout). While attending Belmont University and splitting her time between Nashville and LA, Dasha has collaborated with various up-and-coming artists, including Pink Slip, Inverness, Taska Black, and more. This past year Dasha has broken through on TikTok, with several of her videos going viral, garnering millions of views and likes. Her debut EP “$hiny Things” was released in March and has streamed over one million times. Her latest single “TALK” produced by Bardo & Matt Harris, dropped August 13th via Quadio Records. Management: abir@quadio.com