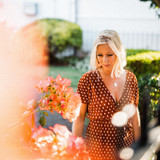 Motown legend Martha Reeves put it perfectly, describing Joanna Cooke as “the baby girl singing the blues”. Joanna’s voice has the soul and power of someone way beyond her years, and her self-penned songs so raw and honest they leave a lasting impression on her audiences. The West Country born singer/songwriter grew up in a strict but passionately artistic family, where her father's collection of blues records by greats like Howling Wolf and Robert Johnson was the soundtrack to her upbringing. A restless desire for music has spurred Joanna throughout her music journey. Joanna taught herself the piano from a keyboard she found in a skip and wrote songs that brought her school teachers to tears. Fast forward and it's this self-sufficiency, drive and talent that now see Joanna supporting and collaborating with big name artists and performing her own solo shows. These successes range from festival main stage appearances, supporting Paloma Faith and Rag'n'Bone Man, to intimate solo gigs. She has also worked with quality artists such as Jo Harman, Beth Rowley, Ben Ottewell (Gomez) and Wildwood Kin. Joanna's 3 EPs and single released to date have drawn positive reviews, and widespread radio play whilst Joanna's vocal and songwriting collaborations with international dance music producers include No1 Club Chart hits in Australia & South Africa. Early 2021 sees Joanna working on her next record release and collaborating with producers both at home and abroad.