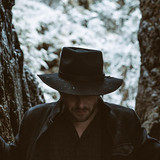 Matias and the Canyons

Matias Haavisto is a singer-songwriter also known as Herman, the banjo player in Steve'n'Seagulls – the band that went viral after releasing their bluegrassy version of AC/DC’s “Thunderstruck” on YouTube. Matias and the Canyons is a four-piece band that was born in spring 2019 when Matias (vocals, banjo, guitar), Jarkko (Guitar), Luis (Bass) and Janne (Drums) entered a rehearsal room and started playing Haavisto’s new songs. It was the first time they ever played together, but the band had the sound Matias was looking for right from the beginning. Although you can hear the banjo every now and then, the bluegrass crossover renditions by the Seagulls do not feature on the album. Matias and the Canyons follows the path laid out by 60s and 70s folk rock and contemporary Americana.

Haavisto has toured around the world with Steve'n'Seagulls over the past few years. On the tour bus, listening to bands and artists like CSN, Neil Young, Tim Buckley, Jason Isbell, Chris Stapleton and Joshua James got him deeper into the music of Laurel Canyon and Americana. There he found a new way to write songs. “The uniqueness of the song probably comes from my roots and background. Yet different landscapes, experiences and people have their effect on songwriting. Usually, I aim to evoke a feeling in the song that will trigger something in the listener’s imagination. It is like painting to some extent, I guess."