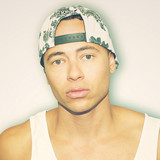 "Whether from stage or my studio my number one goal is to engage with fans and uplift souls" Growing up in Ladoga, IN (population under 1000) with his mother, Harris would visit his father every summer in Phoenix, AZ. It was there he gained a fascination with watching music videos and has been working ever since to become a respected performer/recording artist himself. Ben started his professional career in entertainment while completing his degree in Broadcasting at ASU. He was heard around town (under the alias Ol’ Green Eyes) earning an undefeated rap battle title on Phoenix’s #1 radio station and opening up for major artist like Lil’ Wayne, Justin Timberlake,