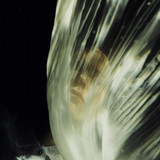 Music has always been around Margaux Sauvé, born in Quebec City to a family of musicians; she picked up the violin at the tender age of five. Singing came a bit later as she thought that “to be a singer you had to have a powerful voice and be loud”, something that doesn’t come naturally to her as a quiet, thoughtful person. It wasn’t until she started to write music whilst studying psychology at University that the creativity and desire to express revealed itself: “it just opened a completely new path for me”. And now, with ‘Heaven, Wait’, her mesmeric debut album ready for release, recorded largely at home with her partner @Louis-Étienne Santais, working separately in the same house they would bounce ideas between rooms before coming together to rehearse the songs once they have developed into a solid enough form. Together they have created an album that blends pop songs in sophisticated production. As she moves from the dark to the light, we have been offered a compelling snapshot of grief, growth and desire.