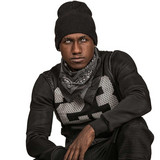 At first, Hopsin was famous for his falling out with the pioneering label Ruthless, but that became a footnote when the rapper, producer, and actor released the hit track "Sag My Pants" on his own in late 2010. Born Marcus Hopson, the Los Angeles native signed with Ruthless in 2007, with his Gazing at the Moonlight album following on the label two years later. A battle in the press followed, with Hopsin claiming he had not authorized the album's release, while Ruthless' owner -- and Eazy-E's widow, Tomica Wright -- claimed he had, but the end result was a professional split. Self-promotion suited the then independent rapper as his "Sag My Pants" track lit up Internet video-sharing sites in 2010. It would be featured, along with some diss tracks directed at Ruthless, on his RAW mixtape, which was released that same year. By 2011, Hopsin's image included white contact lenses that made him look quite ominous, and when coupled with a positive message, the rapper had found himself a welcoming posse with Tech N9ne and his Strange Music roster. In 2012 it was announced that the two were working on tracks for Hopsin's 2013 album, Knock Madness. Pound Syndrome followed on the label in 2015, with guest appearances from Jarren Benton and Dizzy Wright. It debuted at number 17 on the Billboard 200. Following the 2016 dissolution of Funk Volume, the label he had founded in 2009 with business partner Damien Ritter, Hopsin launched a new label of his own, Undercover Prodigy. His first effort for the fledgling label was a diss song to Ritter, "Ill Mind of Hopsin 8." Preceded by singles "The Purge" and "Happy Ending," he delivered his fifth album, No Shame, in November 2017.