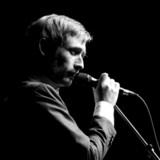 The Divine Comedy is the alias for Neil Hannon, a Northern Irish pop singer/songwriter with aspirations of becoming a chamber pop fusion of Scott Walker, Morrissey, and Electric Light Orchestra. During the early '90s, he built up a strong cult following with a pair of idiosyncratic, critically acclaimed records before his third album, Casanova, became a mainstream success in the wake of Brit-pop's popularity. Subsequent outings like Absent Friends (2004), Bang Goes the Knighthood (2010), and Office Politics (2019) continued to toe the line between majestic orchestral pop and clever, irony-ridden indie rock. In addition to his work with Divine Comedy, Hannon has composed the themes for the popular British TV shows Father Ted and The IT Crowd, and has collaborated with Pugwash's Thomas Walsh under the moniker the Duckworth Lewis Method. Originally, the Divine Comedy was an R.E.M.-influenced guitar-driven trio, formed in Londonderry, Ireland, by Neil Hannon (vocals, guitar; born in Londonderry on November 7, 1970), John McCullagh (bass), and Kevin Traynor (drums). The trio released an EP, Fanfare for the Comic Muse, in the spring of 1990 and supported the record with a few concerts, including a supporting slot for My Bloody Valentine. In 1991, John Allen joined the band as lead vocalist, and the group released the EP Timewatch, which was recorded when Hannon was still vocalist, that fall. The following year, they relocated to London, where they regularly supported Suede on club gigs. Produced by Edwyn Collins, the Europop EP was released later in 1992. It was the last recording the original lineup would release. Following Europop, the Divine Comedy fell apart, and Hannon went back to Londonderry, where he began to write songs again. In 1993, he was signed to Setanta as the Divine Comedy and released Liberation to positive reviews. Promenade followed in 1994, again to positive reviews throughout the U.K. music press; it appeared on year-end lists from NME, Melody Maker, and Q, among others. Following the release of Promenade, Blur, Oasis, and Pulp made British indie rock acceptable for the pop mainstream, and the Divine Comedy benefited from their progress. Released early in 1996, Casanova was greeted with enthusiastic reviews and it slowly began to build an audience. "Something for the Weekend" became a staple on Chris Evans' radio show, and he had the Divine Comedy on his TFI Friday television show, the first TV appearance for Hannon. When it was released as a single a month later, "Something for the Weekend" entered the charts at 14. Soon, Hannon was appearing not only on the cover of Melody Maker but there were articles about him throughout mainstream press, from The Guardian to Just Seventeen. "Becoming More Like Alfie" was released in August, and while it peaked at 27, it nevertheless expanded the band's audience, as did "The Frog Princess," which reached 15 in November. The Divine Comedy supported the final single with a tour with a 30-piece orchestra, culminating with a concert at London Shepherd's Bush Empire, which provided the basis for the group's next album, A Short Album About Love. Released to coincide with Valentine's Day 1997, the record was greeted with positive reviews and the strongest initial sales of any Divine Comedy record to date. In 1999, the Divine Comedy celebrated ten years; they also ended their deal with Setanta Records. The release of A Secret History marked the occasion, but Hannon had his hand in other projects. He contributed vocals to Tom Jones' Reload as well as Ute Lemper's album Punishing Kiss. A new deal with Parlophone surfaced at the dawning of the new millennium and Hannon headed into the studio with producer Nigel Godrich. The end result was the stunning Regeneration. This particular album focused on the seven bandmembers as a whole, and was likely their finest effort since 1996's Casanova. Unfortunately, it was also the last release with the band. Hannon expressed a need to go solo, and he picked up an acoustic guitar and played several club gigs before joining piano man Ben Folds for a slew of American dates in spring 2002. In 2004, after moving to Dublin and becoming a father, Hannon -- the only remaining member -- released the critically acclaimed, self-produced Absent Friends, a sincere return to form that reunited him with Godrich and longtime collaborator Joby Talbot. Hannon returned to the studio in 2006 for the Divine Comedy's ninth album, Victory for the Comic Muse, which utilized 28 other musicians and was recorded in just two weeks. In 2010, the Divine Comedy released their tenth full-length, Bang Goes the Knighthood, which became their highest-charting album on the U.K. charts since 2001's Regeneration. Foreverland, the band's 11th studio long-player, was released in September 2016 and fared even better, soaring to number three in Ireland and peaking at number seven in the U.K. Hannon's 12th set, Office Politics, arrived in 2019 and included the bouncy single "Queuejumper." In 2020, the Divine Comedy issued the hefty 24-disc retrospective Venus, Cupid, Folly and Time. ~ Stephen Thomas Erlewine, Rovi