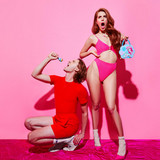 Starbird and the Phoenix is the technicolor, solar-powered alt folkpop love child of NYC based artists Courtney Bassett and Andrew Swackhamer.

Driven by ukulele extroversion and stratospheric harmonies, the two flaunt powerful rock/pop vocals, and infectious, belt along melodies aimed straight at the heart and the nether regions :) The pair have been charming audiences throughout NYC since 2017, when they debuted their first EP, “Altar of Your Love”. Their 2018 summer dream pop tune and music video, “Sunbeam”, is an anthem of love to the LGBTQUIA and mental health communities. S&P have also been a delightful force in the Broadway fandom since Bassett’s stint in the Josh Groban helmed “Great Comet”. Since quarantine, they’ve been sending musical love letters through the internet waves via the Times Square Alliance’s “Songs for our City'' and “Broadway Buskers” series, and will be releasing their first LP, “Starfire” in February 2021. Sounds/Vibes similar to: A Great Big World, Mika, The Mamas & the Papas, Jessie J, First Aid Kit, Jukebox the Ghost.