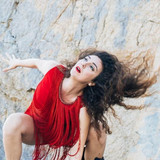 Pilar Andújar, began her dance training at the early age of seven and graduated with a superior degree in Spanish Dance and Flamenco and Ballet and a Master of performing Arts.   Her debut as a singer was in the Joyce Theater of New York in 2002 Carlota Santana Flamenco vivo’s Company   Pilar Andújar presented her first album "Andró" as a singer. on 2017 and She did several tours around Usa, Spain, Algeria, Turkey and Mexico.  Her album was nominated reaching even the final in 7 different categories to the Min Awards 2018 (Of independent music).   The song "La última palabrita" won the first prize in a songwriters competition in Alicante.   She has taken her music to places such as Morelia’s Square in Mexico, The Salle Magreb de Oran in Algeria, The Arts Center Theater of Ozark's in Arkansas, The Music Festival METUART in Ankara, Scat Jazz Lounge in Dallas, One2One in Austin, The National Theater in Bosnia or Cafe Berlin in Madrid.   The US has awarded her due to his curriculum and fifteen years dancing and singing in the country, "The green card" or American Residence for artistic records.   Her fusion of traditional Flamenco with New Flamenco and pop has been called "Imperious, Dominant and Individual" by the New York Times of New York.