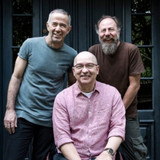 The most successful band in Brazilian rock, Os Paralamas do Sucesso profited from the early experiences of previous bands, consolidating the prosperity of the genre while leading the way for other groups. With 12 albums released in Brazil and two in Argentina, some of these selling over one million copies, the band also has a noted international career. Os Paralamas do Sucesso were formed in 1982 by bassist Bi Ribeiro (born in 1961, Rio de Janeiro, Brazil), guitarist/vocalist Herbert Vianna (born in 1961, João Pessoa, PB), and drummer Vital Dias, who was replaced the next year by João Barone (born in 1962, Rio de Janeiro, Brazil). The focus of the band was reggae and ska with a rock background. Ribeiro and Vianna, who lived in Brasília, DF, were acquainted with each other from a young age. Vianna liked to play the electric guitar, but Ribeiro wasn't a musician at the time. In 1978, at 16, Vianna's family came to Rio with him, and Ribeiro arrived the next year. Vianna insisted that Ribeiro buy an electric bass, inviting a high school mate, Vital Dias, to play drums. With the three of them enrolling in college in 1980, their rehearsals became sparse. The end of that year found them disenchanted with their undergraduate courses, and they turned to music, inscribing their trio under the name Os Paralamas do Sucesso at the festival of the Universidade Federal Rural do Rio de Janeiro (were Ribeiro was studying) in mid-1981. "Vital e Sua Moto" was one of the registered songs, but all three weren't classified. Even then, they were allowed to play in the breaks, but drummer Dias had abandoned the scene, leaving room for João Barone, who studied zootechnics there. On September 17, 1982, the trio played the same University again, where Dias and Barone were to take turns at the drums. But Dias, probably believing he was not up for the competition, abandoned the setting and the band after two songs. In late November, the band opened at the Western bar in Rio. At that time they already had some originals, and included Renato Russo's (a friend from Brasília times) songs, like "Química." The response was good, and they recorded their first demo. After trying some vocalists, Vianna decided to take control of the vocal parts. The demo spun quite a bit on the Fluminense FM program Maldita (a radio program that specialized in rock), and the band yielded a packed house in their second season at the Western and an invitation to open a Lulu Santos show at the Circo Voador the following month. At that point they received invitations from three recording companies -- Warner, PolyGram, and EMI-Odeon -- signing with the latter in April and releasing their first single, "Vital e Sua Moto," in June. The song sold 11,000 copies and before the end of the year, their first LP, Cinema Mudo, was released. The trio later regretted doing the album; at the time, they couldn't fight the producer, who decided to top it with keyboards and guitars. But they went on, opening at the New York nightclub Danceteria in that year. O Passo do Lui, released in August 1984, solidified their connections with the new wave reggae proposed by the Police and the English bands Madness and the Beat, among others. The album had the hits "Óculos," "Assaltaram a Gramática," and "Romance Ideal." The band immediately began to play to larger audiences, like the presentation at Barrashopping's Sextas Musicais when they played for 5,000 people, soon followed by the Rock in Rio Festival (January 1985), an event attended by around 250,000 people on each of its five nights. Here, they performed two shows: on January 13 and 15. On June 15 of that year, they did two performances for 17,000 people each at the Gigantinho, in Porto Alegre, RS, receiving in that night the gold record for selling 100,000 copies of O Passo do Lui. In March 1986, they did the first of many Argentinean tours, playing at the Chateau Rock Festival (Cordoba) and at the Paradis nightclub in Buenos Aires. Selvagem, their next album, was released on July 30, 1986. The album, which had been distributed to stores 45 days before, had already sold 300,000 copies. The international career of the band, the most expressive until then in the Brazilian rock scene, exploded with another tour to Buenos Aires, Argentina, in the same year, followed by Spain, Paraguay, Uruguay, Portugal, Chile, France, and Switzerland, where, at the Montreux festival on July 4, 1987, they recorded their first live album, D. The album had, along with the keyboard of João "Fera" Gonsalves, George Israel's (Kid Abelha) sax, foretelling a phase where brass sections and keyboard would be incorporated in Os Paralamas' sound. The year finished with a prime-time special about the band released by the second largest TV network in Brazil, SBT. 1988 brought an invitation for the band to open a Tina Turner show in Bueños Aires on January 3. Four days later, they opened for UB40 and Simple Minds at Rio's Hollywood Rock festival. In February the band, together with Fera and a brass section (and participation by Charly Garcia) recorded Bora-Bora, released on May 27. The band continued to regularly release albums in the late '80s and '90s: Big Bang, 1989; Arquivo, 1990; Os Grãos, 1991; Severino, 1993; Vamo Batê Lata, 1995; Nove Luas, 1996; and Hey Na Na, 1998. In Argentina, the band released two highly regarded albums in the '90s which sold very well -- Paralamas and Dos Margaritas -- continuing to perform for large audiences there. Vamo Batê Lata, a live CD, sold 800,000 copies in Brazil. In 1997 a box set was released, titled A Pólvora, it included the band's first eight CDs and a remastering of Abbey Road. Hey Na Na sold one million copies before its release. ~ Alvaro Neder, Rovi