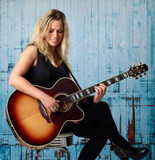 ALEXANDRA JARDVALL Her first payed gig was in 1987 and she's been working non stop ever since, enjoying every second of it. “What an unbelievable joy it is to be able to get paid for what you love the most.” Alexandra, the artist, entertainer, singer-songwriter and troubadour, sings, plays the guitar and harmonica. Her voice is warm and strong and her way of being is present, loving and funny. At the moment she’s mostly touring around Sweden, Norway and Finland, and the venues are pubs, festivals, ski resorts, company events, private parties and weddings, but also, military missions being a field artist. On top of that, she’s been playing onboard the Viking Line ships, starting 2002, pushing over a thousand gigs there. Different constellations, like bands, a quartet, a trio and a duo, but she decided to start touring on her own in 2000. Together with the Swedish comedian, Jörgen Sjöberg, she’s currently also in a constellation called ”Stand-up c/o Music” where the two entertainers combine humor and music. The two have done around 150 shows together. Her debut album ”As Good As It Gets” was released in December 2009. The critics softened and called it ”A Welcomed Debut”. The second album ”Aurora Skies” was released September 01, 2016. In 2018 she did a spring tour and a summer tour with @Moneybrother. 2021 includes her dream tour in New Jersey, USA.